Sounds of the Season Presented by CBS 12 News

CBS News 12 presents the season opener as a holiday treat for viewers in a concert that features guest violinist Valentina Paolucci performing variations of Greensleeves in an arrangement by Music Director Gerard Schwarz. The program of this first televised performanceby Palm Beach Symphony also features arrangements by Schwarz of the seasonal classics Silent Night and We Three Kings of Orient Are and beloved melodies from Tchaikovsky’s Nutcracker Suite No. 1, Op. 71A which include the Overture, Russian Dance and Waltz of Flowers. Pachelbel’s Canon in D Major, arguably one of the most famous and recognizable pieces of classical music, is one of five Palm Beach Symphony premieres on the program. In a timely and uplifting message of hope, the Symphony performs Sleepers Awake from Bach’s Cantata No. 140 based on apopular Lutheran hymn written by a 16th century Lutheran pastor to provide spiritual inspiration to his community ravished by plague. The musical holiday journey ends on a merry note with Anderson’s Sleigh Ride.

There are multiple ways for you to watch the performance:

Overture from Nutcracker Suite No. 1,Op. 71A

March from Nutcracker Suite No. 1,Op. 71A

Trepak (Russian Dance) from Nutcracker Suite No. 1, Op. 71A

‍Mirlitons from Nutcracker Suite No. 1,Op. 71A

We Three Kings of Orient Are

‍Sleepers Awake from Cantata No. 140

‍Waltz of the Flowers from Nutcracker Suite No. 1, Op. 71A 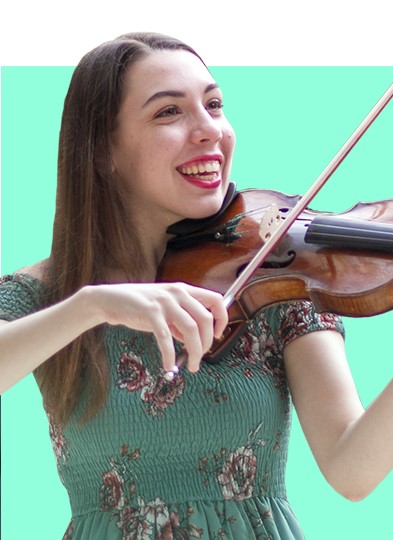 The holidays are a time for family and Palm Beach Symphony welcomes 19-year-old Paolucci playing the 1627 Andrea Amati Cremona copy violin which she received as the inaugural winner of the Symphony’s Lisa Bruna B-Major Award. She currently attends University of Miami on a full music scholarship in the Frost School of Music where Maestro Schwarz serves as a Distinguished Professor of Music. Paolucci has played in performance venues such as the Elbphilharmonie in Hamburg, Royal Albert Hall in London, Konzerthaus Berlin, the Concertgebouw in Amsterdam, Usher Hall in Scotland, Chicago Symphony Hall and Carnegie Hall. She has performed in music festivals including the BBC Proms, Tanglewood Music Festival, Young Euro Classic 2019, Edinburgh International Festival, Caramoor International Music Festival and Bowdoin International Music Festival.

This will be Palm Beach Symphony's first televised performance in its 47 year history. Please consider supporting the Symphony's efforts to engage, educate, and entertain the community through spirited performances of orchestral music. Your gift will help support the work of our Music Director Gerard Schwarz and our orchestra musicians, the programs that provide music education enrichment for students, and our efforts to liven the community with inspiring music.